Aye Aye landlubbers (and a fellow seafarer I notice as well) who may take the time to read my ramblings from time to time.
Just had a frantic but fantastic 7 week leave that involved 3 days in the UK at the start of it for a wedding party and buying a new motor car for MrsB
.
The car ended up as sort of compromise because where as I was looking for a reliable run about that was easy to park and reasonably comfortable for longish journeys and in a nice tasteful sort of dark blue colour, MrsB wanted something that had at least a three liter engine 4 wheel drive with 6 speed auto/tiptronic transmition and that went like shit of a shovel (her words I can assure you) if so desired.
Imagine both out delights at finding an Audi TT 3.2 Auto Quatro for a bargain price and we even managed to get a superb french sink thrown in with the deal.

I had to go back to the UK to pick it up after about 10 days of being at home and had an “enjoyable and somewhat invigorating” drive from a place called Battle down to Pompey via M25 and A3.

Although it is MrsBs car I must admit to driving it like I stole it every time I get behind the wheel and yet even in my most derring do devil may care moments, utilising all my years of experience behind the wheel (many of them above the recognised speed limit) this car just laughs at me as though to say “You Wanker!!!, is that the best you can do?? is the that your best shot??? Ha you feeble pussy”  So much so that I have taken to driving it reasonably sensibly on occasions just to show it who its bosses husband is. Oh yes that will teach it.

It handles like no other car I have driven (and I have driven and owned some gems) and its road handling and acceleration are quite remarkable if so desired. It is, in short, a right fucking bundle of laughs to drive and I haven’t got out of it yet without a big grin pasted on my mug.
One of the madder thing is that even though some people we know have had a little “tut tut, what about the fuel costs” (not that we have asked anyone to put fuel in it for us) but it does loads more MPG than the pick up truck whom many would consider to be a very noble and fitting vehicle for a pair of scruffy renovators.
Ah well you cant win em all eh folks?
I am guessing that some people cant see past the gleaming body work and the 4 exhausts and the 3.2 badge but if they looked into my laughing glinting eyes as I was driving it or being driven by MrsB in it then they might understand why.
After the pick up for the last year or two it is like being someone who usually rides donkeys on the beach jumping up onto the back of a prancing frisky racehorse that just wants to gallop like a mad bastard everywhere. I know not everyone will like it (we don’t care) or even consider it worthy of a blog but it is the newest addition to the Bentley family and a very welcome, exciting and enjoyable one too.

Yer tis in all its glory

One of the many tasks completed this leave was a quick bit of remedial work I had to do because of how I had set up the rain water run off that runs in the patio (terrace) and then under the sleeper steps and then under the crescent part of the terrace then away down to a large soakaway.
(Ha I was going to say French Drain but I guess they only call them that anywhere that is not France, where they become just a Drain)
Then there is to be fitted an overflow drainage pipe from the soakaway that leads down to a rock feature and then leeches out into the field and will take all the rain water from the back of the house away.

The flaw in my cunning plan was that I realized I had made an error, in that I had no way of reaching in to remove debris in the trap (under the join of the sleepers) so I had to rectify that before we could start the terrace.
We lifted the sleepers and the metal cover I had installed. I then cut the metal channel covers underneath in order that the length of channel cover outside (on the main terrace) would be easy to remove and then we would be able to get a hand and arm in to unblock any leafy build up.
The pictures are self evident as to the process as I had to make sure that the drain would work on the terrace and actually take the rain water from the crescent water into the save-all. 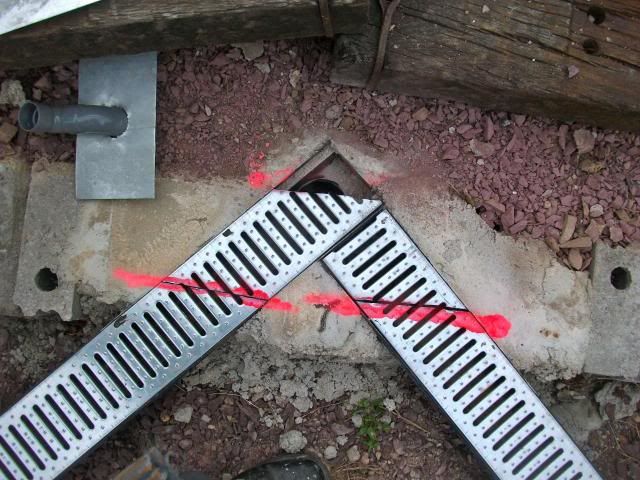 The solid metal covering over the channels is to protect debris from falling down between and behind the sleepers and blocking the save-all.
You can see how with the solid metal debris preventers in place it will still be possible to remove the grating from next to the sleeper and either work a hose or a hand in to remove any crud.
the idea will be to have the first two feet of the channels filled with some scrunched chicken wire which will catch the usual autumn debris and be easy to draw out clean and replace.

Once we had put the sleepers back it was time for us to start laying the terrace slabs that MrsB had made.
Happy days indeed

Aye Aye Land lubbers, Back to sea again but with lots to write about:-
Loads of electrical work done,
Kitchen floor in (whihc is a story in itself)
Insulation progressing well,
Back windows in (apart for the 4 meter one)
Workshop 50% relocated,
Fosse to be fitted within the month,
Temp hook up to cold water in house enough for one bog, one tap and a washing machine,
lots of fiddly bits of ceiling work done to accept the light fittings towards consuel,
Work underway to ensure a snug family christmas with a temporary 14KW wood burner in kitchen. (it is actually an insert fire resting on bricks in the fireplace where the cuisinaire will go so will chuck all heat into the room),
Some of the patio laid with the homemade slabs and much more.
and other bits as well so I will get writing and get some stuff posted on here.


Here is one of the the news addition to the Bentley clan, which is a purchase that MrsB made at a car boot sale nearby and is particularly proud of.

It is a manual cement mixer. Roll a Mix

First load it up

Then take it for a little stroll Then begin the emptying process step 1

I think the caption should read “MrsB stop fucking about and come over here and have a look at this. Its all French to me”